Designed with both internal technology and an external app, the Goodnite is one of our top picks in anti-snoring pillows. 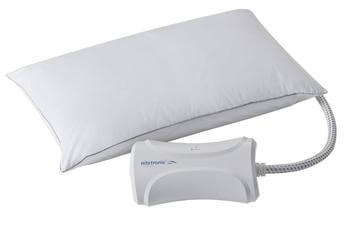 I can be picky about anti-snoring pillows.

Thankfully, there are enough good anti-snoring pillows on the market that I can still recommend a few potentials to interested parties.

One of these diamonds in the rough is something called the Nitetronic Goodnite Anti-Snore Pillow.

The Goodnite is a pillow that's jam-packed with special technology to detect and eliminate your snoring. It also connects to a smartphone app that can be used to monitor your sleep activity and gauge how much that the pillow is helping.

It's a pretty nifty combination, and it turned me into a convert with just a couple of weeks of use.

But you don't have to believe me right off the bat. Scroll on down for a more thorough, in-depth Nitronic Goodnite Snoring Pillow review. 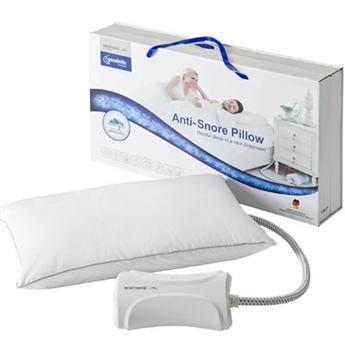 This is a loaded question, and the answer can range from obesity to constricted nasal passages. For most people, however, the cause is simple: an obstructed airway.

When you sleep, your throat muscles relax so much that they can block your airway and reduce the amount of oxygen coming into your body. As it struggles to get through, it vibrates against the tissue of your throat and makes noise. The noise is what we consider snoring.

There are many products aimed at stopping this chain of events. For example, you can find anti-snoring mouthpieces that hold your jaw at an advanced angle and keep your airway open all night.

Anti-snoring pillows are a gentler alternative. They're more comfortable and less invasive. You won't have to wear anything to use them.

In the case of the Goodnite, they can come with other perks, too. But I'll get to those in a minute.

How The Goodnite Snoring Pillow Helps

The manufacturers of the Goodnite claim that it can reduce snoring between 65 - 85 percent.

But how does it actually work?

The first thing to know about the Goodnite is that it isn't your usual anti-snoring pillow. While the others are designed to simply elevate your head and neck to encourage the flow of oxygen into your lungs, the Goodnite takes things a step further with wireless technology.

While you're sleeping, sensors in the pillow will track the sounds and vibrations of your nighttime movements. When it senses that you've begun to snore, it will send a signal to gently inflate and deflate the pillow's interior air chambers. Your head will slowly rise and fall with them.

Does this remind you of anything?

It should. It's reminiscent of a spouse nudging you in the middle of the night to stop your snores, and it works in the exact same way.

Your head will tilt. Your airway will re-open. Your snores will cease. 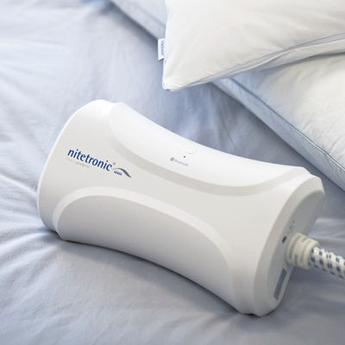 The Goodnite looks like a standard queen-sized pillow with an attached power base.

When you peek beneath the surface, however, there's a wealth of technology that works in overdrive to give you a good night's sleep.

For starters, the electronic sensors are placed at strategic intervals inside of the pillow.

The manufacturers call them "non-contact position sensors," and they're evenly spaced and always ready to go. They'll start analyzing your sleep movements as soon as they're activated.

There are also six different air chambers in the pillow to handle the inflation part of the process. You won't feel them until and unless they fill up. This happens very slowly, so you won't feel jarred.

As for size, the Goodnite measures 24.0 x 14.5 x 3.0 inches. I couldn't find its official weight anywhere, but it's only a bit heavier than a regular pillow thanks to its power base. 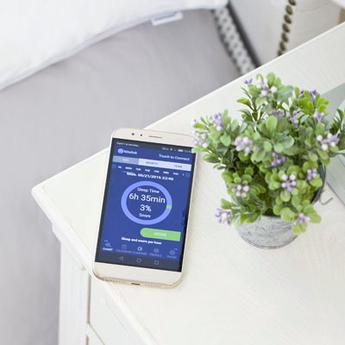 This is my favorite part of the Goodnite. Not only will the pillow itself go to work on fixing your snores, but it's also connected to a Nitelink2 app that can track, record, analyze, chart and monitor your sleeping habits.

Would you like to know the nightly statistics for your sleep time, snore time and snore intensity?

The app can pull up exact figures down to the second.

Would you like to look at graphs that compare this week's sleep to last week's?

The app uses bright colors and simple figures to walk you through it.

You can also adjust the settings of the pillow through the app.

For example, you can make it "hold" its inflated position for a longer period of time, and you can adjust the sensitivity level of its sensors based on the noises of your bedroom.

I should mention that you don't have to use the app in conjunction with the pillow. If you don't own a smartphone or just aren't interested in tracking your sleep habits this way, you can completely ignore the existence of the app. The pillow will still work fine without it.

Personally, however, I'd highly recommend downloading the Nitelink2 app. It offers so much valuable data that you can use to tweak your nightly routine and encourage deep, restful sleep.

The Goodnite has a shelf life of several years. While the sensors might keep chugging along forever, the filling will wear down over time, so you'll need to replace the product with a fresher model. It's a lot like a regular pillow in this regard.

The app, of course, will work indefinitely. You might want to download updated versions as they come along, but its basic form isn't going anywhere.

The Goodnite is one of the rare anti-snoring pillows that's been clinically tested for effectiveness. Even better, the results were positive.

The study took place at a university in Germany. Participants were male and female snorers who came into the lab two nights in a row.

On the first night, they slept with a "deactivated" Goodnite. This meant that they used the pillow but didn't turn on its inflating technology or use the app. They slept like they normally did and snored as much as usual.

The second night was when the magic happened. Using an "activated" Goodnite, participants of both genders experienced a drastic reduction in their snores. Not only was this backed up by the technology monitoring their sounds and vibrations, but it was also reported by the participants themselves.

They felt the difference in their sleep quality when they woke up in the morning. They felt refreshed and well-rested after using the Goodnite.

It only took a single evening to work.

Like any product, the Goodnite has its flaws. They may or may not be deal-breakers for you, but in the interest of a fair and impartial product ranking, let me lay them out.

The biggest drawback of the Goodnite is that it might wake you up in the middle of the night. This never happened to me, but I've seen other customers talk about it, so I know that it's a problem for at least a certain percentage of people. The inflation is supposed to be slow and gradual enough that it doesn't disturb your rest, but it might not work that way for you.

Another issue with the Goodnite is its return policy. While the manufacturers offer a 30-day trial period for new customers, there's a "restocking fee" that will get applied to any returns, so you won't actually receive all of your money back.

The Goodnite also has a rather limited one-year warranty that doesn't cover any accidents or damages. If you mess it up through improper use or care, you're on your own.

Are you still wondering if the Goodnite is right for you? Here are a few of the most common questions about the pillow that I've collected from around the web.

This is one of the most important questions that you can ask about a pillow, and the answer is yes. The Goodnite is made of a soft polyester material with plenty of interior filling to keep it nice and plump. You should have no problem drifting off to dreamland with your cheek pressed against the Goodnite.

Don't worry! I was only painting a picture for effect. The Goodnite works with all sleep positions, so it doesn't actually matter if you sleep on your back, side or stomach. The pillow will still inflate when it detects snoring, and the app will still analyze and record your nighttime noises.

Yes. The inflation process is almost completely soundless, and the app won't make any noise at all. You won't have to worry about beeps or alarms trying to get your attention at 3AM.

This can be a problem with other anti-snoring pillows that use microphones to detect huffing and puffing, but the Goodnite is a little more advanced. Thanks to its sensors, it can detect vibrations as well as noise, so it has the ability to filter out things like pets, fans and air conditioners. It will only respond to your snoring and not to ambient noises around the room.

There are both advantages and disadvantages to using the Goodnite. Let me detail them for comparing and contrasting purposes.

I'm a big fan of the Goodnite, and I don't always say this about anti-snoring pillows. I have high standards when it comes to things like comfort, durability and effectiveness, and it takes a standout product like the Goodnite to get my official endorsement.

So, here it is. I'm endorsing the Nitronic Goodnite. It's a soft, fluffy pillow that will feel good beneath your head even as it utilizes advanced technology to stop your snoring. It also connects to a smartphone app to help you monitor and understand your own sleeping habits.

Best of all, it's non-invasive. It won't require you to wear anything to bed or do anything special with cords and remotes. Just lay down and use it like a regular pillow.

If you're ready to get a full and quiet night of sleep, try the Nitronic Goodnite. 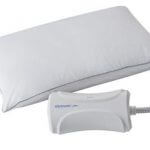